From The Inside Out – Understanding Syringomyelia & Syringobulbia 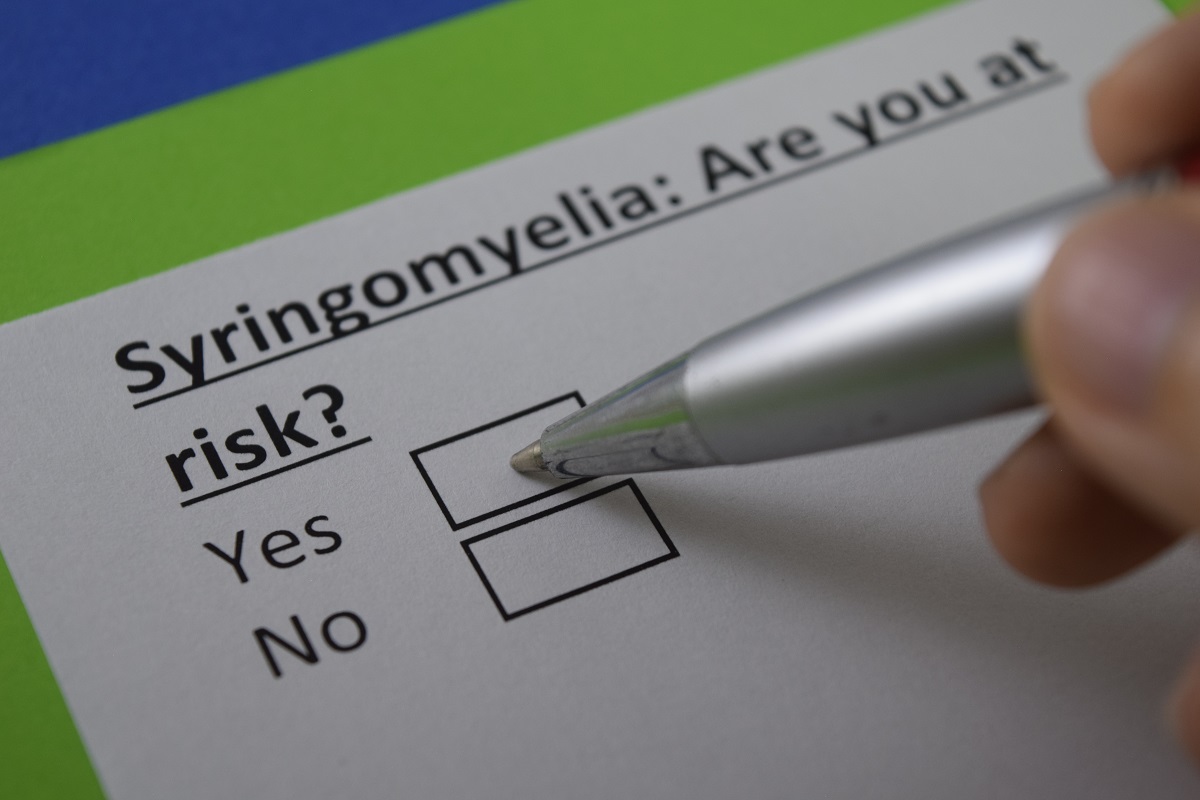 WHEN A DOCTOR TALKS ABOUT THE “MOST SERIOUS” COMPLICATIONS SURROUNDING CHIARI MALFORMATION, THEY USUALLY SPEAK OF PARALYSIS OR DEATH. WHILE BOTH OF THESE ARE LESS COMMON THAN THE ARRAY OF OTHER SYMPTOMS AND COMPLICATIONS, THEY BOTH CAN INVOLVE THAT OF A SYRINX.

The word syrinx (seer-inks), plural syringes  (seer-en-geez), means cavity or cyst. Syringomyelia (seer-ingo-my-el-lee-uh) is when the cyst forms in the spinal cord (myelo usually refers to the spinal cord), and when the cyst is in (or ascends up into) the bulbar region of the brainstem (the medulla oblongata) it is called Syringobulbia (seer-ingo-bulb-e-uh). While these cysts are technically the same cerebrospinal fluid-filled cysts, because they are damaging a different part of the body (each with a completely different function), the location of the syrinx has everything to do with the symptoms that it can cause. 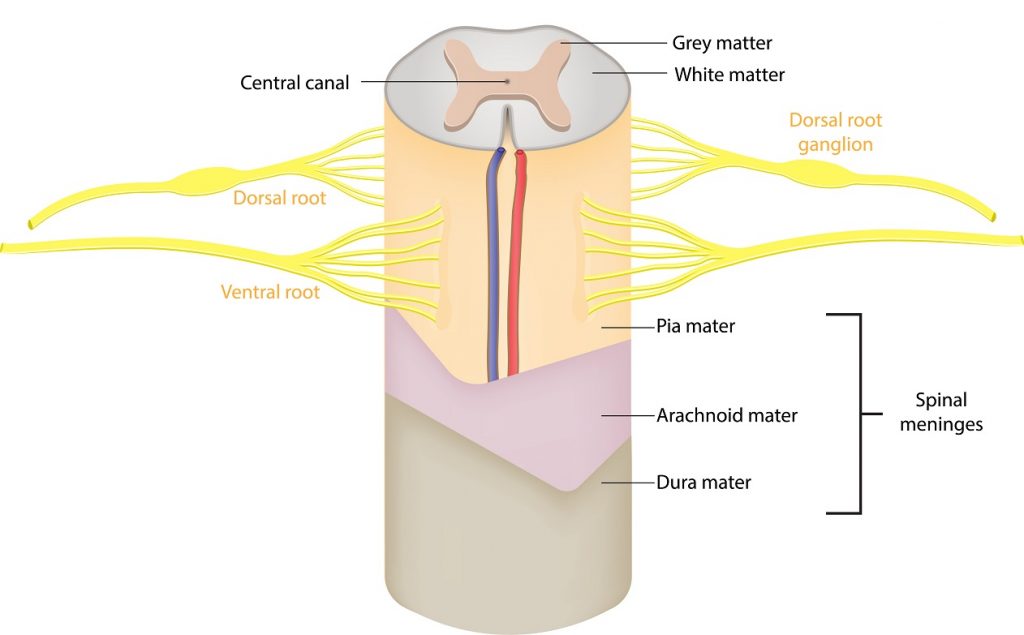 The Central Nervous System (CNS) is an amazingly complex network. The brain, brainstem, and spinal cord each play a role in communicating to coordinate everything that happens in our bodies (even when no cognitive thought is required). The messages to and from the brain are sent through the brainstem, down through the spinal cord, and out to our nerves. When that signal is blocked, it can cause interruption from that point down. When it’s thin, it interrupts the signal in the middle (gray matter), as it widens it interrupts the signal more and more, so it’s harder to get signal through the cord at the widest point of the syrinx. 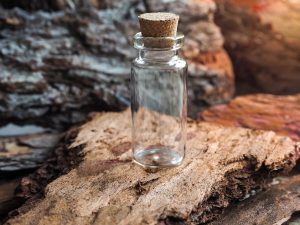 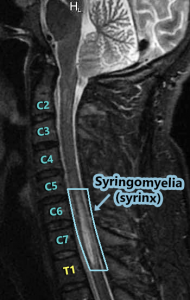 Syringomyelia:
Syringomyelia does not usually run the entire length of the spinal cord like the central canal (but it can). Instead, it often seems to spontaneously appear. As the CSF increases in a syrinx, it can either lengthen or widen. The length doesn’t matter much (radiologists note the location because they report what they see and try to be precise). But a neurosurgeon that knows about syringes, knows that what really matters is the diameter of a syrinx (which is where the risk of paralysis can come into play). Symptoms tend to vary based on where the syrinx is located in the spinal cord. The highest point of the syrinx (where the initial disruption starts) and the widest point of the syrinx (location of the greatest disruption) should always be considered because there are different nerves branching from the spinal cord at different intervals. A syrinx interrupts the communication from the top of the syrinx down, so a syrinx that is higher in the spinal cord can have an impact on a larger range of the body. Someone with a syrinx in the lumbar region of the spinal cord will usually have communication problems from the waist down, but someone with a cervical syrinx is likely to have problems from the neck down. A syrinx in the upper thoracic spinal cord (or above) will often include the arms since the peripheral nerves that lead to the arms branch off around the T1 vertebra. The wider the syrinx, the greater the interruption of communication. Therefore, a syrinx should always be gauged by its diameter and not its length. Symptoms generally include (from the syrinx down): muscle weakness, pain, and spasms in legs; pain, tingling, burning of arms; muscle wasting (atrophy); loss of reflexes; loss of pain senses, loss of temperature sensation, numbness, pain, and stiffness in back/shoulders/upper chest (cape-like area); stiffness of muscles; muscle contractions (fasciculations); bowel & bladder dysfunction; scoliosis; paralysis (rare). 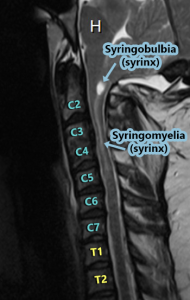 Syringobulbia:
Syringobulbia exists when a syrinx forms in the medulla oblongata (the bulbar region of the brainstem) OR when a syrinx in the cervical cord extends upward into the medulla. A syrinx in the medulla can cause medullary issues or in extreme cases, death (since the medulla is responsible for things that happen autonomically (automatically) for survival – such as breathing, heart rate, swallowing, gag reflex, etc.). Dysautonomia is an umbrella term used to describe any dysfunction of the Autonomic Nervous System (ANS), both Sympathetic and Parasympathetic divisions, often accompany any damage to the medulla. When talking about Dysautonomia, many tend to think of Postural Orthostatic Tachycardia Syndrome (POTS), but POTS is but one symptom of Dysautonomia in a long list. The damage from Syringobulbia is not generally isolated to the medulla, but to the cervicomedullary junction (where the cervical spine meets the medulla), it can also affect the cranial nerves causing symptoms such as facial sensory loss (unilateral or bilateral); extraocular muscle palsy; nystagmus; palatal palsy; atrophy of the tongue; dysphonia (vocal cord paralysis); slurred speech; indistinct speech; drooling; tongue fibrillation; oropharyngeal dysphagia; impaired gag reflex; hearing loss; tinnitus (ringing in the ears); alveolar hypoventilation; Sleep-Disordered Breathing (SDB); Central and obstructive sleep apnea; Anhidrosis (inability to sweat normally); Inability to burp (Retrograde Cricopharyngeal Dysfunction – RCP-D). 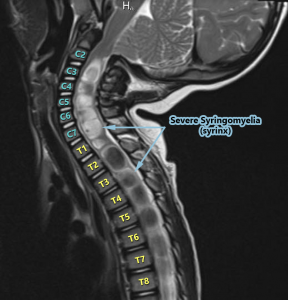 Monitoring The Syrinx:
Both Syringomyelia and Syringobulbia tend to be progressive, but in some cases, patients report having no symptoms and imaging proves it to be relatively stable in size. In this case, monitoring is generally recommended. A neurologist or neurosurgeon should carefully monitor these patients to track changes in the diameter of the syrinx (which should include regular imaging) and/or any evolution in related symptoms.

Surgical Treatment Of The Underlying Cause:
For symptomatic patients, or when the syrinx is progressing in diameter, or when the syrinx is so wide in diameter that it is stretching the diameter of the spinal cord from the inside out, treatment is essential. This generally involves treating the cause of the blockage of cerebrospinal fluid. When syrinx exists in a symptomatic patient with Chiari Malformation, a posterior fossa decompression surgery is usually recommended, with the desired result being to re-establish the flow of the cerebrospinal fluid to the spinal canal (so it no longer reroutes to the spinal cord and/or low-lying medulla).