The Origin of the “WTF!” Name 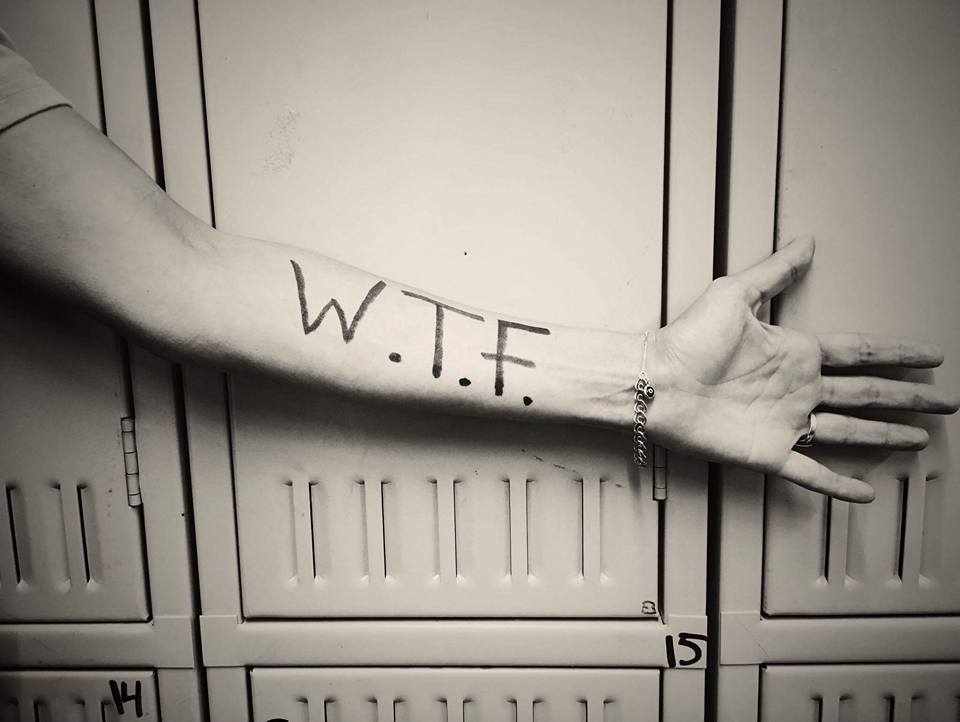 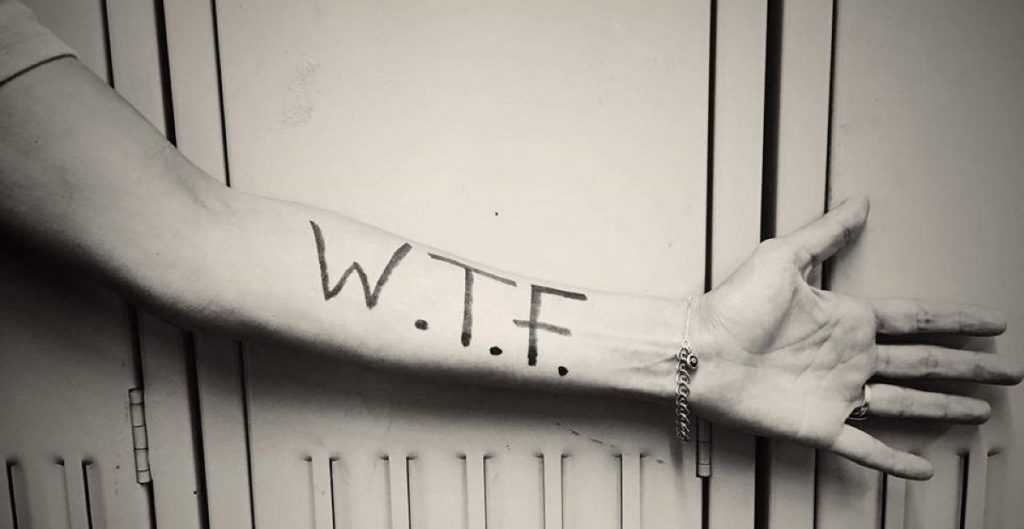 Some names have no meaning and some names mean absolutely everything to and about the bearer of the name. Our name falls into the latter category.

Despite the more popular acronym, WTF! stands for Worth The Fight!

The origins of our name began with someone that I love to the moon and back, who was struggling with depression. This person was cutting themselves and trying to mask their pain with drugs and alcohol, and attempted suicide before I realized what was going on with them.

Life isn’t easy for a Chiari family. From the moment that I was told that my head and neck pain wasn’t just pain, but something wrong with my brain, everything in our family changed. Everything became centered on me.

Surgery came just weeks after diagnosis for me. It was in hopes that I could become the wife and mother that I once was, the wife and mother that my family so desperately needed me to be. Two years after decompression, I had a revision to fix a pseudomeningocele (leak) with an SP shunt (Subgaleo-peritoneal). It was about a month after this second brain surgery that I realized that there was much more going on in my house than I’d ever dreamed.

It was just after 2 am when there was a bone-chilling pounding on our front door. It was the kind of pounding that would awaken even the heaviest of sleepers – the kind of pounding that you’d never forget. My husband and I rushed to the front room, greeted by siren lights and multiple people shining flashlights into our windows. It was a firetruck, an ambulance, and the police. We opened the door and one of the officers informed us that they had reason to believe that our daughter had attempted suicide. Words could never express the feelings that I had as I ran desperately to her room unsure about what I’d find when I opened the door. She was alive, but incoherent and unaware of her surroundings. The officer intervened to assess her condition, asking if she was able to get up and come out of her room to talk. The one officer talked to her and another two pulled us aside to talk to us, as the paramedics stood by. Everything was surreal. How could I concentrate on hearing and answering questions when I didn’t even know if our daughter was going to live or die? The officer explained that she had called a friend after taking pills with wine or champagne. The friend told his mom and together they called the police while he continued talking with her. She had initially told this friend that she was in a park across town, so the police had been scouring the park looking for an overdosed teenage girl, and when they couldn’t find her, they pinged her cell phone which led them to our home just in the nick of time. My emotions raced. How could this be when she had come to our room earlier that night, looking tired, telling us how much she loved us, and that she was going to bed? (We should have known that something was wrong, but again, I had been so lost in my own world that I couldn’t see all that my children were going through at the time.) After assessing our daughter, the attempt was deemed “credible and in immediate need of emergency care,” and she was transported by ambulance to the county hospital emergency room.

My husband and I followed in our car. At the hospital, we were informed that she had taken multiple doses of my husband’s blood pressure medications and multiple doses of my opioids. The doctors said that the first concern was her heart, “if” she survived through the night. The next concern would be liver toxicity since the opioids all contained Tylenol. And that if she survived and made it through those steps and deemed stable, she would be held on a 5150 (Involuntary Psychiatric Hold). While we prayed at her side her blood pressure dropped down to the lower 50s/20s. We called for the doctor and they told us that there was nothing more they could do (it was too late to try to pump her stomach), she would either survive the night or wouldn’t. They told us to try to keep her awake, so we walked laps around the ER every single time her blood pressure dropped in an attempt to keep her awake. I don’t know how I held up my head that night, I was running on pure adrenaline at the thought of losing my only daughter. She survived the night and while we still had to wait for the toxicity reports on the liver tests, they allowed us to walk with her over to the Psychiatric Department of the hospital.

After a twenty-four-hour evaluation, our daughter was moved to a San Francisco hospital for a weeklong intensive therapy program. We couldn’t visit her for the first few days. We were limited to scheduled phone conversations. At first, she just wanted us to go get her. It’s incredibly hard as a parent to be in a position where you legally cannot just take your child home. But we knew she needed help beyond what we could offer, and eventually, she realized that she needed that too.

Over the week, she worked on herself and we worked on creating a safer environment for her to come home to (they actually have a checklist when something like this happens involving a teen). I won’t go into all the details of how we tried to safeguard our home and family after realizing that Chiari hadn’t simply set out to steal just from me physically, but its attack extended to our entire family in every way. But there was a website that I happened by that really caught my attention.

I happened upon a story “To Write Love On Her Arms” by Jamie Tworkowski. It’s a story of a group of friends learning how to fiercely love a friend struggling with depression, addiction, self-injury, and suicide. They would write the word “LOVE” on her arms; the same arms that she had been carving the words, “FUCK UP” on. They figured that if she went to cut her arms again, she’d be reminded how greatly loved she really was.

Chronic pain conditions (such as Ehlers-Danlos, Chiari Malformation, and the other comorbids) can take a toll on us and how we think, how we see our future and the value that we see us having in this world. As we see ourselves become increasingly dependent on our family members, we see the burden that it places on them, and it hurts. We know that they say that we’re ‘not a burden,’ but we see it. When we hear those that we love, deny that a burden exists, we know they’re just saying that because they love us. “It’s nothing,” they tell us. IT’S NOT NOTHING! IT’S EVERYTHING! BECAUSE THEY MEAN EVERYTHING TO US! Perhaps it would be healthier to say that ‘we’re worth the burden,’ instead. No mother can deny that having a newborn baby is a burden of love. It’s absolutely exhausting, but we know that despite the burden, no matter how hard it gets, that little baby in our weary arms is absolutely worth the work! (Just like my daughter and all that she went through, there’s nothing that I wouldn’t have given to see her through it. She was worth it!” And as I continued with my fight, I realized that I was too and if we were going to fight to win this battle, we had to have very real conversations about my fight. My family had to be allowed [encouraged even] to admit that they get exhausted without fear of hurting me or offending me. It enabled us as a family to put the blame on my conditions so that it was Chiari that has robbed us, not me. It had robbed all of us, and we weren’t going to play games and put it on anything or anyone else. We were going to fight back as a family.

So if anyone has a problem with our name or our acronym, I’m perfectly okay with letting that be THEIR PROBLEM.

If you have a family member struggling with EDS/Chiari/Comorbids, whatever, you’re going to have to strengthen one another. WE HAVE TO STOP DENYING THE MAGNITUDE OF THE FIGHT, acknowledge it (every part of it), and fight back as a family, where every single person in that family KNOWS (beyond a shadow of a doubt) that they’re WORTHY! That even if we as a family must go to the ends of the earth together, it’s worth it, because each of us is WORTH THE FIGHT! And if someone forgets, write it on their arm to remind them!

This article is dedicated to my daughter, MyKaella, who taught me what it means to live knowing that we’re WTF!
I’m so proud of the woman you’ve become and the woman that you helped me to become!