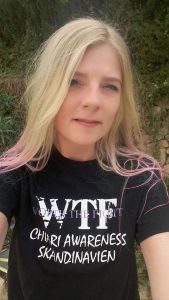 I had a rough journey with these conditions and I am sharing it to help show how complex we can be and how much we need the medical community to step it up a notch (or ten)! I grew up in Denmark, where I lived when I was diagnosed and had my first surgeries.

I exhibited various pains already from early childhood. As very young child, I would scratch big wounds in my head to my parents’ great frustration. I also suffered from headaches at a very early age, but my older sister had done the same, so when teeth correction helped her it was also hoped it would with me – and it did. Then started the pain in my back, shoulders and arms and that pain slowly moved upwards and developed. I was sent back and forth between physios and rheumatologists but all I got was scoliosis and hypermobility. I was told it was nothing to worry about and just do some physiotherapy. I was in a bad shape when I finished my teens and despite trying, I couldn’t really manage a job. At one point, I was seeing a chiropractor for misplaced hips and he wanted to check the x-ray that the public system had done of my neck and which was deemed clear. Here I had my first “real” diagnosis, Klippel-Feil malformation of c2-c3, which I was then told, could not cause any problems and was common (which it absolutely isn’t). 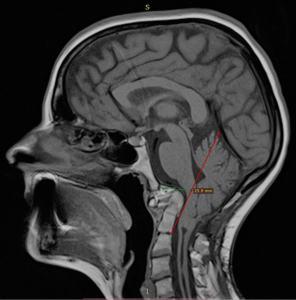 Years passed by with various periods of severe pain flares, flares that felt nothing like the pains I had before. But no doctor was really believing me. I had a spontaneous collapsed lung a couple of times in this period and ended up with surgery for this (I woke up under this surgery which later also turned out to have a significance). At 25, one day I had a sudden and severe onset of symptoms – a pain in the back of my head feeling like two stabbing knives. This did not resolve and after several attempts with various medicines, that I only got sicker from, I finally saw a new rheumatologist whom again treated me with harsh accusations of laziness and psychological imbalance. I can assure you he was the one bringing on my tears that day, despite the extra severe pain I had been in for weeks. I was placed in the care of the hospital physios and after a while, it became clear to them that there was something really wrong and they got me to see another rheumatologist, who in turn took their word and referred me for an MRI. I had only just turned 26 when I was diagnosed with Chiari 1 Malformation and Syringomyelia – in my full spine. 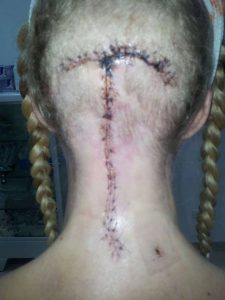 I did a bit of internet research as information in Danish was very sparse and realized there was a certain number of bad outcomes due to something called Ehlers-Danlos Syndrome, Retroflexed Odontoid and Basilar Invagination. I asked my neurosurgeon, who was supposed to be the best in Denmark at this point, about these things – he claimed I didn’t have any. However, he did agree to refer me for Ehlers-Danlos evaluation. Here I was told I did not have that either. However, I was bordering on a similar connective tissue disorder called Marfan Syndrome, which they still could not diagnose me with due to my heart and eyes not being faulty. I had my first decompression surgery in December 2006. It was rough. I reacted badly to anesthetics and to the morphine and I also lost a lot of spinal fluid. I could not raise myself up the first month which I thought was normal. Slowly, I got better, and imaging showed my syrinx shrinking. Two and a half years later, though, I started experiencing dizziness and nausea and though my first surgeon didn’t believe me, imaging finally showed a big collection of fluid outside my spinal cord originating from a hole in the duraplasty used to close after tonsillar cauterization at my first surgery. I tried talking to the surgeon about concerns of Klippel-Feil and instability, that I had read about, but they would not hear of it and said that for now they would just focus on this issue. So, this was repaired, and I moved to Spain with my boyfriend at the time. I was placed on a disability pension from Denmark and that enrolled me in the Spanish public healthcare. I did, however, in the meantime follow up on my concerns and contacted a specialist, who had written about the Klippel-Feil and Chiari connection, and he straight away stated I had some severe issues with my odontoid and needed it removed and my neck fused to my skull. My first meeting with a surgeon in Spanish health care came up and he just looked at my imaging two minutes then stated my problems were way bigger than Chiari and Syringomyelia. He also diagnosed a severe retroflexed odontoid and Basilar Invagination – so severe he had a hard time understanding how I could breathe, let alone walk. But given my reasonably good condition, he opted to postpone these surgeries as they are big and not without risks. 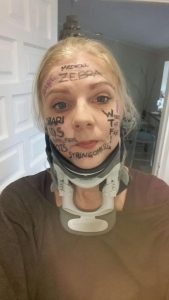 A couple of years of enjoying the benefits the climate change gave me (and likely putting my head in the sand) went by but then I could no longer ignore the fact that I was getting worse. I was in a rough period with other matters of life, so it took a while before I realized I couldn’t escape the changes in my body. I started losing weight amongst other things and after a quick detour of fear of stomach cancer, I finally realized that everything that was going on was related to my brainstem compression. So, I went back to the neurosurgeon. He ordered some testing but before it could be done, I ended up admitted urgently after I stopped breathing one night. From here started a roller coaster. I didn’t feel right about their suggestions and the surgeon that was going to operate didn’t feel very secure himself even. I ended up getting transferred to a private hospital in Barcelona that calls themselves a “Chiari Institute.” Had I known what I do now, I would never have paid the fee for a filum release, but the doctor claimed this was what I needed and well… It was worth a shot in this urgent situation. He then sent me home, claiming I was cured. I didn’t feel right and breathing through the night was still a problem, so I started sending my imaging to experts around the world and working on getting referred to another hospital in Spain’s public health with higher expertise. All these experts claimed I wouldn’t have long to live unless I had this odontoid approached.

An American expert, however realized I had even more going on and that my gut feeling about the first Spanish hospital was correct – when I confronted them with these things they backed out. He also explained to me why he thought I indeed had this Ehlers-Danlos Syndrome too. Fast forward, long and rough fights with health care and the Danish system that refused to take any responsibility despite the first doctor who didn’t see a bone poking more than a centimeter into my brain and almost crushing my brainstem, another public health Spanish doctor who was mortified they had diagnosed me like they did in Denmark and changed my Chiari 1 diagnose to a Chiari 1.5, I finally found some Spanish doctors in private care, that I would trust to take on my case – and that my parents could just find the money for, through a loan on their house. Ideally, I would have gone to this doctor in America, but price and decline didn’t allow. 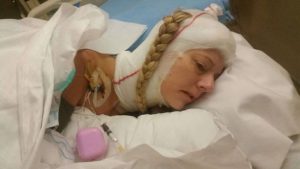 October 2016 I finally had a partial odontoidectomy and a fusion, which beyond doubt saved my life. It was a rough ride, for both me and the surgeons. They had to deal with complications related to my anatomy, to the mess the first surgeon in Denmark had left – he had indeed damaged my muscles more than I ever knew – and to the problems relating to the soft tissue. I do know they did a great job, but due to all the mistakes, how complicated my case was and is, I am unfortunately not done. I have ongoing issues and though some of these could have been avoided with the right approach from the beginning, some are just the way it is with these conditions.

I hope that my story will inspire other to take a step back and get better investigated – by real specialists – before letting anyone start cutting. Also, I hope it will serve to see how much we need the medical community to step up and keep up to date with research. These are serious conditions and doctors all over the world are literally playing with our lives. Please help spread awareness – educate yourself and others and ask for raising the standard of care for these complicated conditions.