Brain Under Pressure – A Guide to Understanding Intracranial Hypertension [Updated]

Intracranial Pressure (ICP) is measured in millimeters of mercury (mmHg). Most scholars agree that on average, “normal pressure” should be between 5-15 mmHg, mild to moderate intracranial hypertension between 20-30 mmHg (which “requires treatment in most circumstances”), and an ICP of > 40 mmHg indicates “severe and possibly life-threatening intracranial hypertension.” [1] When high intracranial pressure is left untreated, it creates a “pushing effect” towards the only natural escape at the base of the skull (the foramen magnum), and the cerebellar tonsils in the pathway are pushed through the foramen magnum. [2]

The association between IH/IIH and Chiari Malformation appears to be a malicious intricate pathological circle. The cranium (skull) consists of brain matter, cerebrospinal fluid, and both venous and arterial blood. A hypothesis, referred to as the Monro-Kellie Hypothesis (now better known as the Monro-Kellie Doctrine), states, “The sum of volumes of the brain, CSF, and intracranial blood is constant. An increase in one should cause a decrease in one or both of the remaining two.” Therefore, if an abundance of cerebrospinal fluid (IIH or hydrocephalus), both cranial blood volume and brain matter should be forced to deplete. This depletion is usually directed in the path of least resistance – through the foramen magnum and into the spinal canal. When the brain matter closest to the bottom of the skull (cerebellar tonsils) is pushed through the foramen magnum and into the spinal canal (an Acquired Chiari Malformation), the tonsils act like a cork and blocks the flow of cerebrospinal fluid (regardless of the size of the tonsillar descent), which in turn, continues to raise intracranial pressure.[3]

Oxygen-rich blood travels from the heart to the rest of the body through the arterial system, then the oxygen-depleted blood returns to the heart through the venous system. We have a host of small veins in our head and they dump into a series of large veins, called sinuses. Dural Venous Sinus Stenosis occurs when there is a narrowing of one or more of the venous sinuses (most commonly seen in the transverse sinuses or transverse/sigmoid sinus junction), which in turn compromises cerebral venous outflow through the jugular vein (stenosis/compression of the jugular vein can also result in elevated intracranial pressure [4]). Transverse Sinus Stenosis (TSS) is most common in Idiopathic Intracranial Hypertension (IIH). Depending on the study that you are reading, it is proving to be present in 90-100% of IIH patients [5]. While its connection might sound obscure if you look at it from a Monro-Kellie perspective – The blood going into the head, cannot get out at the same speed (because of the narrowed sinus). When this inflow of blood remains constant and the outflow is hindered, the transverse sinus on that side (we have two transverse sinuses, one on each side) enlarges, forcing the CSF and brain matter to reduce to maintain the volume equilibrium. This reciprocation can happen when any of the sinuses or jugular narrow (stenosis). While scholars continue to debate whether TSS is a cause or consequence of IIH, surgeons continue to decompress us without checking our pressures or decompress (the most invasive treatment) in hopes that it will lower our pressures, and patients are left with untreated high pressure still causing a “pushing down effect” and an enlarged foramen magnum for our brains to be pushed down. [2] The sagging brain once again obstructs the flow of cerebrospinal fluid by plugging the foramen magnum, and that in turn raises the intracranial pressure even more. Or, the untreated high pressure blows through the duraplasty and causes a post-operative leak, known as a pseudomeningocele. 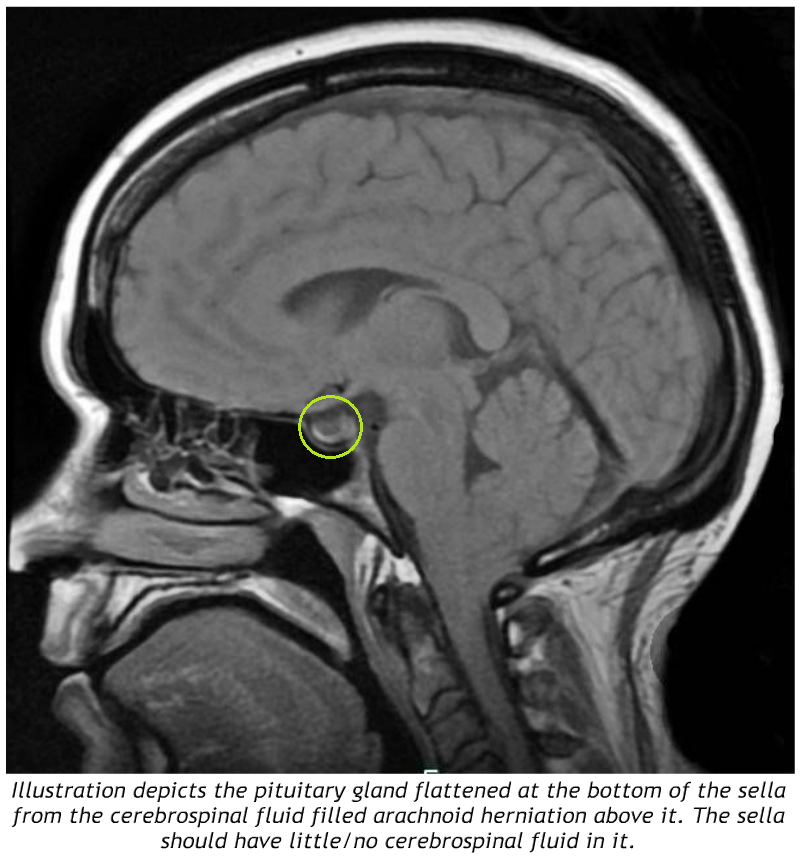 TREATMENT OPTIONS:
If Venous Stenosis exists, stenting should be considered as leaving the sinus/jugular stenosed can post other health risks, and stenting is proving to have much better success with fewer complications requiring revisions. When medication fails to decrease ICP, and a stent is not an option, a Ventriculoperitoneal Shunt (VP Shunt) or Ventriculoatrial Shunt (VA Shunt) can be surgically placed to drain cerebrospinal fluid straight from the ventricle. Shunts are known for failing and often need a multitude of revisions, but even with all the revisions, it is less invasive than a decompression. Shunts under the foramen magnum should never be used as a means of controlling ICP.

For the IH/IIH patient, herniated tonsils should be assumed an Acquired Chiari Malformation (even if a small posterior fossa is evident), and by correcting the high pressure before decompression, the decompression will be less likely to fail.

Helpful Tips:
If you have IH/IIH, it is best to avoid caffeine, avoid progestin based birth control, and all EDS patients should try to avoid the use of fluoroquinolones such as ciprofloxacin (Cipro), levofloxacin (Levaquin/Quixin), gatifloxacin (Tequin), moxifloxacin (Avelox), ofloxacin (Ocuflox/Floxin/Floxacin), norfloxacin (Noroxin), due to the increased risk of aneurysm.