When you start to educate yourself on a condition like Chiari, your vocabulary will be challenged. Most of us study with a medical journal article opened in one tab and medical dictionary in the next. Amongst all the medical terminology you will tackle, there are probably a few terms as important to your understanding of Chiari than comorbidities and pathological/etiological cofactors. When two or more conditions tend to co-occur, they are said to be comorbid with one another. It makes no inferences of a causal relationship between the conditions, only that they co-occur. This co-occurrence deduces that a correlation exists, but when the nature of that correlation is not known, they are just said to be comorbidities. When a “causal relationship” is known or suspected, the conditions start being discussed in terms of pathology or etiology, which are similar, but not exactly the same thing. 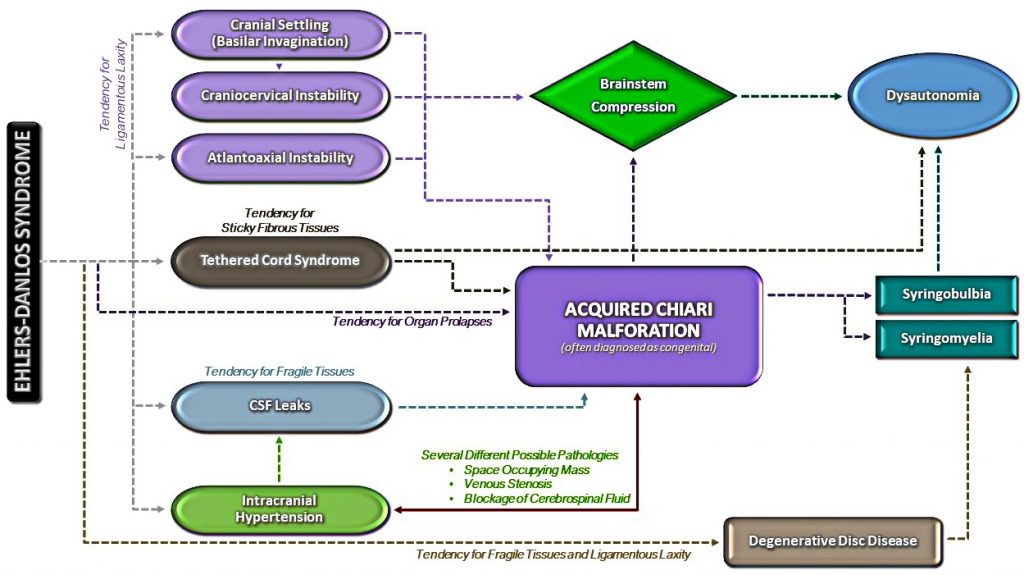 Ehlers-Danlos Syndromes are a group of inherited disorders involving a genetic mutation in one or more of our bodies’ collagen. Collagen is the most abundant protein, making up 1/3 of the proteins in the human body, affecting our bones, skin, muscles, and connective tissue[1]. Collagen is often described as a “cellular glue” that helps hold the body together. When that glue fails to hold, everything seems to go awry; before and after birth: skulls can under-develop in utero, organs tend to prolapse, and bones begin to shift as joint laxity increases (including the bones/vertebrae at the craniocervical junction). Ehlers-Danlos is a primary “root cause” of Chiari Malformations and a majority of the other problems we have. The list in blue is far from being a complete list of conditions caused by EDS. They are commonly accompanied with Chiari because they can cause or attribute to a Chiari malformation (pathological cofactors).[2]

Cranial Settling occurs when the skull has dropped and the odontoid (C2/axis) enters into the foramen magnum (Basilar Invagination). This drop can further compromise the craniocervical junction and as it pushes everything down, it increases the likelihood of an Acquired Chiari Malformation.

Craniocervical Instability (CCI) & Atlantoaxial Instability (AAI) usually occurs with cranial settling and Basilar Invagination (BI). The settling and/or softening of tissue can cause a shifting of the C2 (resulting in CCI or AAI) and the cerebellar tonsils (which are already inclined to prolapse) simply drop down with each shift affecting ones ability to tilt/rotate their head.[3]

Intracranial Hypertension (IH – High Intracranial Pressure) occurs when your intracranial pressure (ICP) becomes elevated. This elevation can happen for a variety of reasons.

Because the area of the skull is fixed in an adult cranium and partially fixed in that of a child, the elements inside the fixed space (CSF, blood volume and brain matter) tend to get pushed out wherever they can (the only place that they can escape without breaking through the dura is through the foramen magnum and the brain matter that’s closest to the foramen magnum is the cerebellar tonsils).[4]

Tethered Cord Syndrome occurs when the tissue inside the epidermis adheres to the spinal cord or filum terminale. While this tethering can happen anywhere along the spinal canal, it is most common in the lower lumbar and/or sacral spine. When this adhesion happens it creates a pulling down of the spinal cord and consequently, the brainstem located at the top of the spinal cord and the cerebellar tonsils just get pulled down with it.[5]

Intracranial Hypotension (Low Intracranial Pressure, often involving a CSF Leak) usually involves a cerebrospinal fluid leak or an over-draining shunt, we will highlight the former. Ehlers-Danlos patients tend to have weak dura matter. Tears/holes in the dura can happen anywhere in the dura surrounding the brain or spinal canal and they can happen completely spontaneously (without a known cause). When the leak occurs in the spinal canal, they can create a suctioning effect where cerebrospinal fluid (CSF) is being pulled down and out, causing the intracranial pressure (ICP) to drop. The cerebellar tonsils that are already prone to prolapse (due to EDS) end up getting suctioned downward with the CSF.[6] Cranial leaks often happen when high pressure is left untreated until the high pressure causes a leak in the dura mater. In cranial leaks, fluid usually leaks through the nose or ears (less common), and you can often taste the metallic taste of the cerebrospinal fluid in the back of your throat. While both spinal leaks and cranial leaks can cause low pressure and low-pressure symptoms, and while both can start, stop, and start again spontaneously, there is an increased risk whenever there is an opening where cerebrospinal fluid leaks outside of the human body (if cerebrospinal fluid can make it out of the body, microscopic bacteria can make it inside the same opening where it can enter in the meninges).[7]

Posterior Cranial Fossa Hypoplasia (PCFH) is the only etiological cofactor listed above that is definitely congenital. The role of collagen in bone development has been long-standing, especially its known contribution to certain conditions like Osteogenesis Imperfecta. However, more recent studies are discovering the role collagen plays in congenital posterior fossa anomalies. Posterior Cranial Fossa Hypoplasia is the most commonly “acclaimed” cause of Chiari malformations, but studies show, that even when all of the other causes above are factored out, only approximately 52% of those left (that fail to meet “the diagnosis criteria” for any of the above), have a small posterior fossa.[8]

Syringomyelia occurs when cerebrospinal fluid (CSF) is obstructed and a CSF filled cyst/cavity forms inside the spinal cord. This cyst is directly related to the obstruction of cerebrospinal fluid that can be caused by Chiari Malformation, Spinal Stenosis (a narrowing of the spinal canal, spinal cyst/tumor, a herniated disc), or irregular curvature of the spine (scoliosis). When that cyst/cavity extends into the medulla oblongata (the lowest part of the brainstem), it is called Syringobulbia, and it comes with a new set of symptoms consistent with the damage being done to the brainstem. So when Chiari Malformation exists with a syrinx, and there is no stenosis or disc problem in close proximity below it, the Chiari Malformation should be listed as the etiological cofactor for the syrinx. If more than just the Chiari Malformation is believed to be causing the syrinx, each would be more accurately described as a pathological cofactor.

Dysautonomia occurs when damage has been done to the brainstem or Vagus nerve. Whenever either of these is damaged, often from compression at/near the craniocervical junction, the autonomic nervous system can begin to dysfunction.

Confused? If you understand the causal relationships but find yourself wondering if a comorbid condition is an etiological or a pathological cofactor, think of it in terms of a domino effect. Only the first domino is the real etiological cofactor. All of the dominoes in between (on the path) are pathological cofactors. The important thing to remember in this array of medical terminology is that while everything is definitely not Chiari, it almost always shares a connection to it, and that is why so many of us have so many conditions and symptoms that doctors call unrelated! It is imperative in our fight that we know “what” we have and “why” it is happening. With such a broad spectrum of symptoms (like we all have), we must educate ourselves and not just believe the limited knowledge of our doctors.

1  McIntosh, James. “Collagen: What Is It and What Are Its Uses?” Medical News Today, MediLexicon International, 16 June 2017, <www.medicalnewstoday.com/articles/262881.php>.